On Tuesday, September 27, around noon, a Turkish Bayraktar drone hit a vehicle on a road near the town of Girkê Legê, killing Zeyneb Sarokhan and Yilmaz Şero. Both were chairmen of the Judicial Reform Administrative Department for the Cizîrê region of the Northeast Syria Autonomous Administration and were on their way to visit prisons in the region that day.

For months, Turkey has been waging a "low-intensity" war in northeastern Syria, Often using drones that targeted kill military and civilian self-government personnel. Just as often, ordinary civilians are also victims of these attacks.

During my last visit to the region in April this year, I met Zeyneb Sarokhan and Yilmaz Şero and benefited greatly from our intensive exchange about the development and perspectives of medico projects.

Zeyneb Sarokhan worked as a women's representative for the region for a long time and was responsible for an orphanage that medico has been supporting since 2019 and which was particularly close to her heart. This orphanage provides refuge for children whose Yazidi mothers had been enslaved and abused by IS henchmen. After their liberation, the women were often unable to take their children back to their communities. Sarokhan made sure that mothers and children could keep in touch. In addition, in recent years she has succeeded in organizing several reunions of Yazidi mothers, who now live in Iraq, and their children. To do this, she negotiated with U.S. diplomats, representatives of the Yazidi community, and the appropriate people in northeastern Syria and northern Iraq - no easy feat with such a highly sensitive issue. Sarokhan's actions were guided in particular by the welfare of the children.

The orphanage supported by medico was a special concern for Sarokhan. She was intensively involved in the reconstruction of an old school in Hasakeh and was herself present when the children moved from Remilan to the new building. Here she visited the children almost daily and maintained a close relationship with them. In April, I spent an afternoon with her at the orphanage, where I was particularly struck by her warm interaction with the children.

But Zeyneb Sarokhan also championed other women-specific causes, women's shelters and anonymous housing where persecuted women and women affected by violence can find refuge. The need in northeast Syria is high and so far there are few places to go, it was important to her to move forward here as well. We had a long conversation about the causes of violence against women and possible prevention work. Zeyneb Sarokhan practically implemented women's rights and feminist concerns, for which the region is always described as particularly progressive - this is how she will be remembered by us at medico.

Since June, Sarokhan has worked in her new position as chairwoman of the administrative department for judicial reforms in the Cizîrê region. There, together with Yilmaz Şero, she was responsible for, among other things, the transfer of the prisons to civil administrative structures.

When I met Yilmaz Şero in April, he was in charge of the prison in Qamişlo, where social workers from the medico partner organization Purity accompany thirty imprisoned young people who have grown up under IS. At the time, I was able to discuss the difficult situation of these young people with Şero and visit their cell in prison. Most recently, he advocated for the relocation of these detained youth to so-called rehabilitation centers. Just last week, Zeyneb Sarokhan and Yilmaz Şero participated in a training by Purity for fifty staff members of a new rehabilitation center, teaching the special protection of children and their rights.

With Zeyneb Sarokhan and Yilmaz Şero, two people have been killed by a Turkish drone who worked for the civil and democratic development of the region and whose death leaves a big gap. This is how the medico partners on the ground describe it, with whom we jointly mourn the loss of two personalities. This attack makes it clear once again that even our partners are not safe. "Now we are all targets. They no longer make a distinction between military personnel and civilian self-government or civil society workers," a close confidant wrote to me. The grief and anger over the deaths of Zeyneb and Yilmaz are mixed with the permanent psychological stress that everyone here has been under for months.

According to the Rojava Information Center, the attack on Zeyneb Sarokhan and Yilmaz Şero was the 81st drone strike this year in northeastern Syria. It killed 66 people (including 23 civilians). Turkey systematically kills military and political leaders in the region, deliberately weakening the self-government that works for democratic development in the region.

These permanent attacks by Turkey on northeastern Syria are illegal under international law, but they are hardly publicized in this country. This was recently discussed by experts at the medico conference "10 Years of Rojava". The silence on this illegal behavior of Turkey must finally be broken. The German government should publicly condemn these attacks. A feminist and human rights-based foreign policy would have to value and safeguard the work of people like Zeynep Sarokhan and Yilmaz Şero and actively oppose Turkish policies in the region. Instead, a silence that seems all the more intolerable in contrast to the unanimous condemnation of Russian war crimes in Ukraine and calls into question the credibility of German foreign policy standards. Human rights violations in Syria have still not been dealt with legally, as access to judicial mechanisms at the international level is complicated. 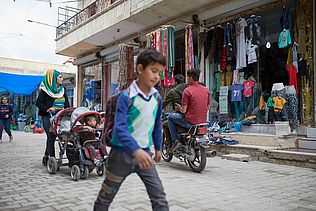 For ten years now, the Rojava project has been under attack, defended and further developed. A travelogue.