The study by the Philippine medico-partner IBON “Four Years After Typhoon Yolanda. Unrecovered Past, uncertain Future”, assessing the rehabilitation, reconstruction and recovery efforts after the super typhoon Yolanda (international name: Haiyan) in 2013, has been released.

The results of the study are alarming. The situation of the people living in the affected area, especially in the Eastern Visayas, has dramatically deteriorated. The Philippine government’s Build Back Better program, supported by international funds, did not perform well.

Instead of focusing on measures supporting the poor farmers and fishers who settled on now declared “no dwelling zones”, they were merely expelled from their former grounds, this in favor of business structures such as hotels and resorts. Additionally, the land use policy favored conversion of agricultural lands to other uses. Furthermore the study founds that although the Eastern Visayas posted the highest growth rate in terms of gross regional domestic product (GRDP) during 2016, there was an increase in informal work, stark landlessness, and acute poverty. Several results of the study suggest that the mode of rehabilitation has aggravated not only the survivors’ difficulty in recovery but also their vulnerability to disasters.

People Surge, self organized and established by 12.000 survivors of super typhoon Haiyan (Local name: Yolanda) still fights for their rights, especially of farmers and fisher folks. Together with other regional and national organizations such as the medico partner SOS, they launch in mid-February 2018 in Manila their protests to demand the current government to once and for all finish real rehabilitation. 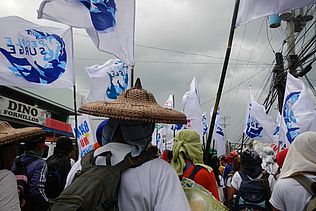 The government failed to think and apply hard lessons. It failed to strengthen the country’s adaptive capacity, unfortunately because its mindset has been… 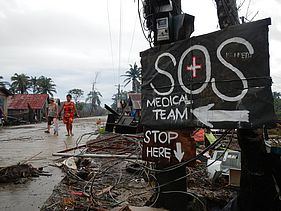 After the devastation caused by Typhoon Haiyan medico's Philippine partners provided sustainable emergency aid thanks to their local structures. The health…