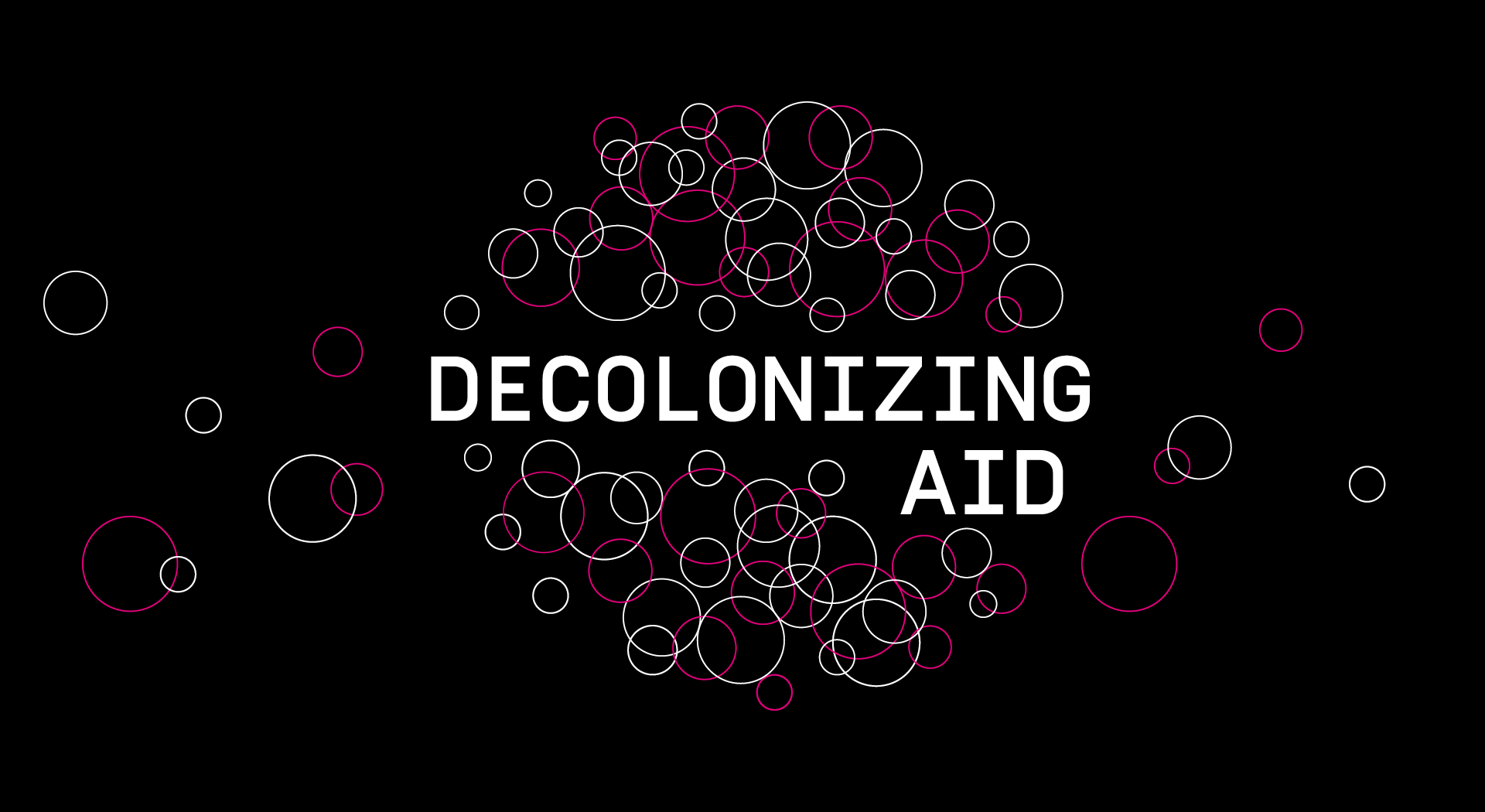 The crises we are already familiar with - the climate crisis, the intensification of the racialized and gendered capitalist system, the health crisis, to name a few - are coming to a head and becoming increasingly intertwined. This creates new dynamics of power and violence, coupled with a growing sense of hopelessness. The (re)construction of the world, thinking and doing it differently, becomes a necessity. In this, aid remains an essential part of the way the world is thought and made. But aid is also bound up in its colonial legacy, in racist structures, and in a market orientation and neoliberal agenda that (re)produces inequalities and marginalizations.

These critical perspectives on development and aid from post-colonial and post-development perspectives have long been formulated by feminist, anti-capitalist and anti-racist voices. They point to how the aid system itself perpetuates forms of economic and financial dependence through institutions, conditionality, or tied aid. On the non-material level, the "global South" is constructed as a place of crises and vulnerability, whose people are defined by crisis - rather than as subjects of their selves and their contexts.

Critical actors around the world are making the case that we need a "decolonial turn" in development studies and practice to unravel the roots of the power relations that produce and stabilize the racist, gendered, sexualized, and class hierarchies that characterize the modern world. Decolonization goes beyond critique and paves the way for the realization of alternative visions and practices of world-making.
And in the spirit of Audre Lorde's dictum, "The master's tool will never dismantle the master's house," the question is how to abolish the master's house. Do we have to? And if it were (to be) abolished, would we also have to abolish aid?
Based on these strong critical interventions in development debates, the overarching theme of this series of events is the decolonization of aid and development. As we look toward a future of a good life for everyone and everything on the horizon of these crises, where is aid to be located? Can aid be part of the shift toward planetary solidarity, or does it stand in its way?

Decolonizing Aid is a series of dialogues. We would be happy if you join us and our guests in the (digital) fishbowl in English, Indonesian or German! The events will be published later on the medico Youtube channel.

The crisis of capitalism cannot be separated from the crisis of development and aid. A capitalism that has long since left the spheres of labor and has inscribed itself in our bodies in its neoliberal form. As the medico conference "beyond aid" (2014) convincingly argued: Aid must be grounded in a concept of power, space and political economy, otherwise it can at best cushion the suffering of a given situation, as efficiently as possible with diminishing resources. We want to question and deconstruct this substitute action, which is aid, for what is actually necessary - namely the transformation towards a good life for everyone and everything.

Against the backdrop of aid's entanglement with capitalist and neoliberal models of development, we want to ask how aid functions within the architecture of the "manor" and how this architecture shapes the practices of aid, its actors and institutions. Can we think aid beyond its effects on stabilizing existing structures and mechanisms of power and exploitation? How can we rethink aid to realize social justice, solidarity, and restitution?

Sima Luipert works in regional and rural development management in Namibia. She is a human rights and social change activist with a background in rural planning and regulation, project management, and community development. She is the Director of Development Planning at the Namibian Regional Council of Hardap. She is also Deputy Director of the Nama Genocide Technical Committee (NTLA) and Chair of the Board of Directors Riruako Centre for Genocide and Memory Studies.

11.12.2022
THE MASTER‘S GARDEN: GREEN CAPITALISM AND ITS INTERSECTIONS WITH GREEN (NEO)COLONIALISM

A fundamental mechanism of capitalist production is the extraction of material from nature to transform it (through labor) into tradable commodities. The promise of "green capitalism" is to reconcile development, growth, and environmental protection. Political and economic strategies such as carbon trading and offsets, net zero, and sustainable consumption allow states and corporations to continue the destruction and exploitation of the commons. But now under the green guise of supposed social responsibility and environmental protection. Yet the destruction of the livelihoods of local and indigenous communities in the Global South is inextricably linked to socio-ecological change in the Global North.

Nnimmo Bassey is a Nigerian architect, environmentalist, activist, author, and poet. He is director of the environmental think tank Health of Mother Earth Foundation (HOMEF) in Nigeria and a member of the Steering Committee of Oilwatch International. He was chairman of Friends of the Earth International (2008-2012) and executive director of Nigeria's Environmental Rights Action (1993-2013). In 2010, he was awarded the Right Livelihood Award. Nnimmo Bassey has written and spoken extensively about environmental degradation and green capitalism on the African continent.

The ambivalences in humanitarian aid are of particular difficulty: on the one hand, it follows the acute moral imperative to alleviate suffering; on the other, it is a continuation of colonial practices that are in large part responsible for creating crises and embedded in the world order that keeps these disasters alive. In doing so, they depoliticize the contexts of suffering and the struggles on the ground. It also raises the question of what it means to help "firefight" in a world that is constantly burning. Despite all the reforms in humanitarian aid, forexample through the 2016 Humanitarian Summit, the questions remain.
If we look at humanitarian aid from a justice- and human rights-based approach rooted in an anti-capitalist and decolonial understanding of the future, several questions arise: How can humanitarian aid be challenged and changed to meet this future? How can we imagine humanitarian aid in transition? Which aspects do we need to protect, which to abolish? Given the not-so-unlikely future of a burning planet: Will humanitarian aid become obsolete as a response to disasters? Can humanitarian aid become part of the transformation?

Tammam Aloudat is one of the leading voices in the field of decolonizing global health especially in the realm of humanitarian aid. As a physician and humanitarian worker with 20 years of experience working with the International Red Cross and Red Crescent Movement and Médecins Sans Frontières (MSF) working in conflicts, natural disasters, forced displacement, and disease outbreaks both in projects and in the headquarters. He has worked on issues ranging from medical standards and quality of care, humanitarian ethics, palliative care, to access to medicines. The president  of the Board of MSF Netherlands and former managing director of the global health center of the geneva graduate institute also co-founded the Action to Decolonise Global Health (ActDGH).

The North-South axis is characterized by unequal power and knowledge relations and hegemony based on a history of extractive colonial capitalism that continues to reverberate today. However, North-South relations as socio-spatial relations are neither as geographically fixed nor as immutable as the term suggests. We are witnessing new "rising powers" gaining economic power, forms of transregionalization, and regional shifts in hegemony through wars and conflicts, for example, as Turkey, Russia, Saudi Arabia, and Iran gain new hegemonic positions through their entanglements in the long-running conflicts in Syria, Libya, and Yemen.

Aid and development are part of these reconfigurations and get visible when when  China is addressing South Asian and African states with “win-win-development” or “South-South-cooperation” that promises “non-interference”,  “aid on an equal footing” or aid without conditionalities. It creates counter-narratives to models of development and aid grounded in Eurocentrism and western-centred understandings of human rights or social progress. How can we rethink these reconstructions of the world through the prism of aid and development? How are aid and development reshaped in these processes? Is aid here confined to a mere instrument of geopolitics that generates already known forms of financial dependency? Or do these transformations give hope for the establishment of new forms of transnational solidarity beyond developmentalist politics and thinking or structures of aid?

19.03.2023
DEMOLISHING THE HOUSE? ABOLITIONISM AND AID: AN ABOLITIONIST JUSTICE APPROACH

Abolitionist voices, demands for reparations, and radical post-development perspectives call not only for the abolition of institutions but for the reconstruction of the world on the basis of an anti-racist, anti-capitalist, anti-colonial, and anti-patriarchal understanding of social and transformative justice. These perspectives make visible structures that (re)produce intersectional hierarchies and help to overcome them. Would we still need help if we understood hierarchies and inequalities as systemic injustices? Can we learn anything from abolitionist and restitution-oriented practices, policies, and histories for this? How can we conceptualize aid, or something akin to aid, in a communitarian sense, a sense of mutual aid?

Lata Narayanaswamy is Associate Professor in Politics of Global Development at the University of Leeds, England. Her research interests include the decolonization of development, the nexus of gender and development, and the relationship between knowledge (production) and development. She is also part of the "COST Action: Decolonising Development: Research, Teaching and Practice ", the "Water Security and Sustainable Development Hub" and the "Gender and information ecosystems in climate change adaptation" project.