After the fall of Kabul: The people on the Greek islands – refugees and residents – should no longer pay the price for Europe's completely misguided and inhumane asylum policy.

An Appeal by Stand by me Lesvos (Mytilini, Lesvos) & medico international (Frankfurt)

Thousands of refugees from Afghanistan, often after years of waiting in one of the so-called hotspots on the Greek islands, of which the notorious Moria camp was only the best known, have received rejections of their asylum applications. The authorities constituted that the application was without any reason, a return to Afghanistan possible, after all, NATO and ISAF were providing security and there were sufficient structures under the rule of law. However, on the contrary, according to the Global Peace Index, Afghanistan is the most dangerous country in the world: terrorist attacks, poor living conditions and political as well as gender-related persecution are justified reasons to flee.

The argument of Greek authorities, if not previously reasonably thought to be unenforceable, has most certainly become invalid as of recent with the fall of Kabul and the chaotic evacuation in August this year. Afghanistan is not safe - certainly not for people who have fled the Taliban. All previous rejection decisions made by the Greek auhorities regarding asylum applications of Afghan nationals should now be considered invalid.

For several years, the refugees have had to endure an inhumane existence on the Greek islands, in tents that are not winter-proof, with inadequate medical care, in a permanent lockdown due to the Corona pandemic. On Lesvos asylum seekers also lost all of their possessions in the devastating fires of Moria Camp a year ago. EU Commissioner Ylva Johansson announced after the fire: "No More Morias" - but the situation for the people in the Greek camps is still unconscionable and the EU is investing in the further militarisation of the external border: Illegal pushbacks, criminalisation of refugees in fast-track procedures and the construction of "prison camps" are meant to deter and prevent migration instead of finding humane solutions.

The Greek government insisted on deportations to Afghanistan; together with Germany, it signed a letter of various European governments for further deportations - only three days before the Taliban’s takeover. Through the EU-Turkey deal, Turkey has now also been declared a safe third country for Afghans. The Greek migration authorities are now primarily interested in the security situation of Afghan applicants in Turkey in order to deport them there. Turkey, on the other hand, has regularly deported to Afghanistan or neighbouring countries (Iran, Iraq) in recent years - Afghans and other refugees are therefore severely threatened by chain deportations in case Turkey readmits them. At the moment, only the Covid-19 pandemic protects refugees in Greece from deportations, because since last year Turkey has refused, with reference to Corona, to accept rejected asylum seekers. However, this could change at any time. Greece is pushing hard for a withdrawal of the readmission ban.

Erdogan maintains good relations with the Taliban, and Turkey is supposed to administer the airport in Kabul. The fact that deportations to Afghanistan, and thus to a Taliban-ruled Afghanistan, could soon take place is a scenario that refugees in Greece and Turkey are incredibly worried about. In Turkey, tens of thousands of Afghans who have also fled the Taliban are in deportation prisons or are staying in the country illegally.

We therefore call on the Greek Ministry of Migration and Asylum to immediately grant a residence permit to all asylum seekers who are still forced to stay on Greek islands and the mainland. We call on the European Union not to leave Greece alone and to immediately accept refugees with recognised status in Europe. We call on the (old and new) German government to support this admission. There are many cities and municipalities in Germany willing to accommodate people.

The people on the Greek islands - refugees and residents - should no longer pay the price for Europe's completely misguided and inhumane asylum policy. The recognition and acceptance of the refugees is the most human solution to dissolve the Hotspot system. European solidarity is needed now more than ever. Afghans, as well as other refugees stuck at the edges of Europe, must be given the right to freedom of movement and a life of dignity.  They have to be allowed to leave the Hotspots to proceed to Europe. 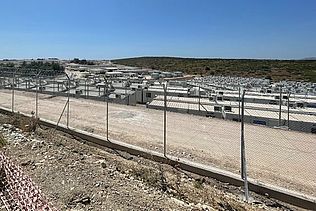 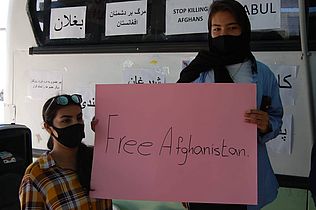 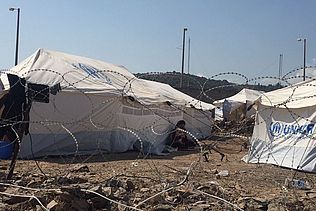 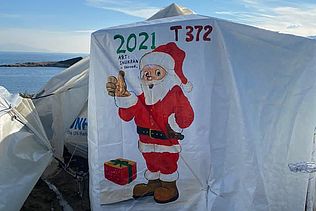