March 8 confirmed it once again: Feminism is a truly global movement. This also means that its differences should be understood. They are more visible than ever in the pandemic.

Purple. Green. Colourful. Black. Together, thousands of feminists flood the streets across the globe. Their voices articulate the common demands for a life free of violence across all countries. Still, the idea of a global feminism is as heterogeneous as the world it stems from. A global feminism might be the commonality of the many feminisms.

Looking at this world from Kenya, writer Yvonne A. Owour provides a relentless normality check: "Who, why, what for? Who should 'fix' this world? Why and for what should it be 'repaired'? In search of a starting point for reconstructing and repairing the world, "alternative archives" are sought: practices and forms of knowledge which submerge and exceed the prevailing conditions of Eurocentric modernity. Such places do often already exist on the local scale. They challenge what Rita Segato calls the "Cartesian extremism" of the very patriarchal thinking which degrades nature and bodies to mere objects, thus exercising ultimate control over life itself.

Such places are worlds within the world. Which are not perfect. But real. Places of care that allow us to be resistant and remain resistant – like the centres of the medico partners Gays and Lesbians of Zimbabwe (GALZ). Places, where ecosystems are repaired or left intact – like the roof gardens in the Palestinian refugee camp in Lebanon. Places, where resources and labour are communally distributed and shared – like the international meetings of the "Mujeres que Luchan" in the Zapatista territories or the resistance camp in the Danneröder forest. It is a matter of learning from each other. From these "islands of sanity", which cannot persist without the demands of decolonial feminist voices: "A despatriarcar! – De-patriarchise!"

In particular, feminist struggles in Latin America have shown the world that even a neoliberal society can be changed from below. "¡Es ley!" In Argentina, after years of struggle, it is now law: the legalisation of abortion. By way of comparison, the right to abortion in Germany – contrary even to the assumptions of German citizens – is not enshrined in law. In Chile, too, the right to legal and safe abortion was fought for hard – but successfully. From Santiago de Chile, a performance spread like wildfire in which feminists pointed their fingers at the perpetrators of sexualised violence: "El violador eres tú - The perpetrator is you.”

They made it unmistakably clear that sexualised violence is neither an isolated incident. Nor that the state can wash its hands of it: "El patriarcado es un juez que nos juzga por nacer. – Patriarchy is a judge who condemns us at birth." Beyond this performance, the feminist movement in Chile has also managed to set strong claims against sexual harassment in public spaces: Not only unwanted touching, but also verbal assaults can now be legally punished. By comparison, German criminal law offers little to no protection against any form of sexual harassment in public spaces.

The structural dimension of sexualised violence is also unmistakably highlighted by Mexican feminists: Years of struggle have succeeded in having the term feminicide integrated into the Mexican penal code. The syllable "ni" underlines the state's complicity in the murders: through impunity, victimisation of the victims or the promotion of misogynist discourses. By comparison: German mainstream media still speaks of "relationship dramas" and individual cases instead of calling the killing of wom oneself en and girls because of their gender what it is –femi(ni)cide.

Femi(ni)cides permeate all social classes and continents. The fight against them is a fight against patriarchy that goes far beyond Latin America: on the global scale, patriarchal relations are inscribed via male claims to ownership of feminised bodies. The latter are not only standardised, but also "territorialised": subjugated and exploited, just as if they were a two-dimensional territory that could be measured and owned. This colonisation of the three-dimensional bodies manifests itself most visibly in femi(ni)cides: perpetrators kill their victims – partners by whom they have been abandoned or who want to leave them. Or even "their" domestic workers, who can be locked up and abused because neither the patriarchal state nor the patriarchal society protect them.

Feminist Fissures in Times of Pandemic

From Latin America, the foothills of la marea verde – the feminist tidal wave, in the green colour of the struggle for reproductive justice – are washing over the planet and carry the struggle against femi(ni)cide to Europe. Another bridge between "here" and "there" has been built by the so-called feminist strikes of 8 March. The global feminist strike should truly be a general strike: "We are all workers." No matter whether it is wage labour, care work, or part of the informal, manufacturing, service or financial working sectors. No matter whether that’s in Argentina, in Lebanon, in Kenya, in Egypt, in South Africa, in Germany. But is it really that simple?

No, of course it is not: feminisms are connected and fissured. Those who imagine a united front of feminist workers are confronted with similar problems as the “workers' united front” once was. The pandemic exposes all those fissures in the world mercilessly that pervade especially the lives of women and the LGBTIQ community. This becomes evident in how differently the idea of "normality" resonates in different places of the planet: "Your lockdown is our normality" said female migrant domestic workers in Lebanon, who are often locked up in households under conditions of modern slavery. Together with the medico partners of the Anti Racism Movement they are reclaiming their rights. Having migrated into the so-called Kafala system, in which they are at the mercy of the householder as domestic workers and often have their passports taken away, they are discriminated against, beaten, raped and even murdered. All this happens in a space of impunity, within the perpetuated lockdown of the Kafala system.

The Corona pandemic has also made visible what has been willingly overlooked, but what connects experiences globally: Structures of social interaction and networks of care broke down in many cases. If these consequences are buffered at all, they are buffered by whom this has always been done: That is, in close relationships and family frameworks. Mostly by women. Health systems are collapsing all over the world, even the German health system is tottering. Medical caregivers have to make up for it. In their majority women. Domestic violence intensifies in the lockdown. Affected: Most of them women. The list could be continued. But this is not about gender quotas. We are concerned with the (patriarchal) principle.

(No) Global Sisterhood in Postcolonial Capitalism?

What does the idea of global feminism mean for the global emancipation movement? Where can connections be made, for instance to the anti-racist struggles of recent years? Don't they organically belong together anyway – as decolonial feminist voices put it? Since long, social categories have ceased to create "clean" dividing lines. Mechanisms of oppression are much more complex than an either-or. (Post-)colonial capitalism is "dirty": The deprived can also be privileged. The oppressed can also be oppressors. This means that invocations of a "global sisterhood" are untenable: They romanticise an only apparent equality. It is the global division of labour that separate us: not everyone goes hungry when a lockdown is imposed. Not everyone experiences domestic violence. Not all work under inhumane conditions in the production sector (e.g. in the textile industry or pharmaceutical production). For sure, the fact that there are working conditions that are not inhumane is a pretty good thing. But many of those who have a save home office cannot even imagine how to live under such conditions. In view of that, the transnational feminist strike must be solidary and empathetic. Knowing that the struggles of bourgeois women to enter the wage labour sphere can even have negative consequences for non-bourgeois women. Knowing that the strike of white women can bypass the realities of Black women's lives by far. Knowing that the strike of LGB can forget the realities of TIQ+.

One thing is certain: The old normality belongs on the rubbish heap of history. But what new normality should replace it? Utopia knows no place. It only knows detours – via the repair of the existing, via the diversions to the best of all possible worlds. No other option is left, but to seek such a starting point for a reconstruction of the world in the ruins of the pandemic crisis, linking it to the fantasy of the beginning of a future in equality, participation and sustainability. The idea of a normality that might be wished back by oneself is ultimately challenged. First and foremost from the South. 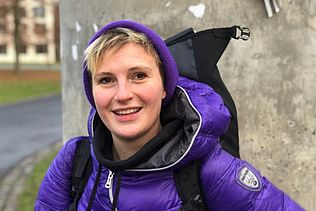 With empathy, trust and respect, medico partners create spaces in which people with massive experiences of violence can regain their dignity and ability to act.