How to move forward in the pandemic? Geopolitical conflicts, the interests of rich countries and the exclusion of civil society make it difficult for the world to come together. By Dr. Andreas Wulf.

For the third time, the 194 Member States of the World Health Organization (WHO) met virtually for the World Health Assembly (WHA). This time, as in May and November 2020, the Covid19 pandemic was firmly at the center of events. At the same time, perhaps even more so than in previous years, it became clear that geopolitical fault lines have not been resolved, even with the return of the United States under President Biden to the WHO. And the role of a critical civil society is even more precarious than before, particularly through the virtual format.

But first things first: Long awaited were the evaluation reports of the Independent Panel for Pandemic Preparedness and Response (IPPPR) and the Review Committee on the Functioning of the International Health Regulations (IHR) on the international response to the Covid19 pandemic and the lessons to be learned.

Both reports identified key weaknesses in the global response to the pandemic, both at the Member state level and at the level of WHO, including in particular a lack of commitment to transparent information sharing and independent monitoring mechanisms that could give WHO a stronger role in pandemic response. However, both reports avoided to clearly criticizing Member States for human rights violations, which have been part of everyday life in many countries for more than a year, especially through the imposition and repressive enforcement of lockdowns and curfews, and which particularly affect informal workers who rely on manual and day to day work and mobility.

On the issue of access to life-saving vaccines and other medical commodities relevant to Covid19 (medicines, diagnostics, medical devices), the high-level commissions also stick to "business as usual": the Covax initiative to procure and distribute vaccines, especially for low-income countries, is praised, and rich countries are urged to give substantial shares of their pre-ordered vaaccine shots, which often amount to several times their population needs. However, the structural conditions for a urgently needed expansion of global production through the temporary suspension of patents and know-how and rapid technology transfer remain unmentioned: the modus operandi of the global community remains "vaccine charity" instead of "vaccine equity," as the Canadian-Indian scientist Madhukar Pai rightly criticized at the presentation of the IPPPR.

The virtual format of the WHA also makes the behind-the-scenes processes of negotiating resolutions and decisions even less transparent than they already are at the usual meetings in the Palais des Nations in Geneva. This is because the many encounters with delegations, on which the critical work of the civil society "watchdogs" lives in these corridors of power, are completely absent in the virtual space. The opportunities for civil society actors who want to speak out competently and critically to make their own statements in the meetings are also becoming smaller and smaller. Different agenda items are discussed together and statements by "non-state actors in an official relationship with the WHO", through which, for example, the members of the Geneva Global Health Hub , can make their voices heard, are shortened to a minimum length of one minute. At the same time, the member states use the deliberations for political exchanges on the global stage that would better belong in the UN Assembly in New York or the Security Council, such as the current escalation of the Israel-Palestine conflict, but also the controversy between Ukraine and Russia over the occupation of Crimea or the status of Taiwan, which the PR China does not want to accept as an independent observer in the WHA.

Finally, the most international attention was given to the December 2020 initiative of the EU and other states, supported by the Director General of WHO, for a Pandemic Preparedness Treaty to complement and strengthen the existing agreement of the aforementioned IHR. In informal discussions, delegations and stakeholders from the Global South in particular expressed skepticism about the intent of this proposal, suspecting it to be more of a red herring from the urgent issues of patent suspension and sharing of relevant technologies and knowledge. Thus, for the time being, an "inclusive" working group of member states has been set up to prepare a first proposal by next November, which will then be negotiated in another special session of the WHA from Nov. 29-Dec. 1.  However, "inclusive" hereby only means that it is open to all member states - there is no thought of formal civil society participation.

This must change urgently if the WHO is not to continue to get tangled up in the diplomatic pitfalls of its Member States. Although the current WHO leadership around Director-General Dr. Tedros is happy to engage in informal discussions with civil society actors, it would be important to have formal participation formats, such as those that have long been a reality at UNAIDS.

And the role of the German delegation? It (rightly) holds itself in high esteem as a champion of multilateralism and as a generous donor to WHO, and it also advocates for a significant increase in mandatory and unrestricted membership contributions to the core funding of this world agency.

At the same time, the German government is not only putting the brakes on all current patent issues and hoping to escape criticism solely by means of voluntary agreements, such as the technology transfer for vaccine production in South Africa that has just been announced by the Ministry of Development and Cooperation (BMZ).

As in the case of the recently passed Supply Chain Act, we frequently see that relying on voluntary commitments by industry is misleading. Only binding requirements can bring about substantial changes beyond promotional individual measures that act as window dressing for „social corporate responsibility“. A binding commitment to knowledge sharing for publicly funded vaccines and other essential health commodities is urgently needed: the Covid19 Technology Access Pool at the WHO, which is still empty after a whole year, makes this very clear.

We know from the story of Robert L. Stevenson that such a dual existence of Dr. Jekyll and Mr. Hyde does not end well. 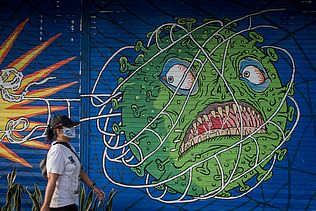 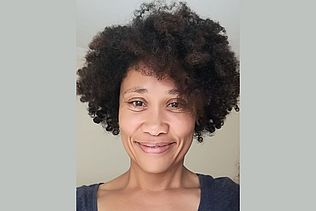 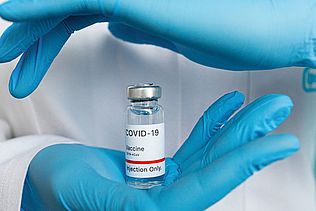