Don’t let yourself be put in a category

A world in disarray remains unpredictable. How should we live in this paradox? Here is one approach.

When the book "Reisegefährten" by the Soviet-Jewish writer Friedrich Gorenstein was published by Rowohlt in 1995, the novel did not attract much attention. Yet the book anticipated the notion of multidirectional memory. The idea, that historical tragedies and crimes against humanity are not only comparable, but possibly occur with an intolerability and parallelism that exceeds the emotional processing capability of the individual. We could have learned a great deal about the historical experience of Soviets and Ukrainians in particular back then. We would have been so much better prepared for today's situation, the Russian regime's war of aggression on Ukraine and the moving resistance of a people who have now finally closed ranks through the war to form the Ukrainian Republic.

Gorenstein belonged to the generation of Jewish intelligentsia influenced by the Soviet era. He left post-Soviet territory before 1990 because he had already experienced too much for an individual to endure: Deportation and the early violent death of his father, writing bans and censorship. Anti-Semitism and Stalinism were the writer's main topics. In his Berlin exile, he wrote "Reisegefährten", a novel about two people who, during a train journey through the Ukrainian landscape of vast plains and birch forests, tell the story of the extermination of Jews by the Germans and the starvation of millions of Ukrainians at the hands of Stalin along their own biographies. In the solitude of the travellers, in the seclusion of a compartment, to the never-ending rhythm of the train.

Most Ukrainians today, regardless of their linguistic background, insist that the unfulfilled promises of history must now come to fruition. Following the Chernobyl nuclear disaster, hundreds of thousands of "liquidators" saved Europe from a much greater nuclear disaster. The first hundred came from Kiev and threw sand into the burning nuclear power plant with their bare hands. Serious estimates put the number of dead men trying to contain the nuclear disaster at up to 50,000, not to mention a decimated generation of the young people living near the NPP back then and many more civilian victims.

There have been three major uprisings in Ukraine since 1990, aimed at democratising and de-oligarchising its institutions. They were able to remove governments, but not to bring about a transformation. Ukraine is the poorhouse of Europe. This is reflected in the use of Ukrainian labour, who are the most ruthlessly exploited workers in the second illegal labour market. The Ukrainian sociologist Volodymir Ishchenko refers to Ukraine as the "northernmost country of the Global South". Why Ukrainians do not give up and bang their heads against a wall of pure pragmatism of the possible is explained by history.

The shock that hardly anyone imagined that this attack by Putin would take place despite clear-cut US-American predictions, has triggered a frivolous debate in this country about who knew it all along. More dramatically, this unpredictability has been a reality in the world, but not in our minds. Now, however, deep fears and uncertainties are taking hold about what may yet take place in the realm of the hitherto unimaginable. Putin's military campaign has taken these fears very carefully into account and openly threatened a nuclear strike. While people in Poland, the Baltic states and the other countries that were not voluntarily part of the Soviet backyard find themselves in a nightmare in the form of a return to post-Soviet domination and dictatorship, the populations of Western Europe are reliving the Cold War with its constant nuclear threat.

For anyone who has parents at home who lived through the Second World War and then receives the news that concentration camp survivor Boris Romantschenko died in a Russian bombing raid on Kharkiv, the world is in as much geopolitical disorder as are their personal feelings. If with regard to the Covid pandemic we can hope that it will eventually be over, the war against Ukraine has destroyed any idea of a return to our old lives. We were already aware that we had lived this comfortable life at the expense of other parts of the world. Now the war on our doorstep and the millions of refugees who probably have no prospect of returning any time soon have finally put an end to the illusion of carrying on with business as usual.

3. The war has been in the world for a long time

It is no consolation that unpredictability has long been part of the everyday matrix in other parts of the world. War has long since existed in a world that sees itself as the end of history, including in Europe. The first European war after 1990, which already laid to rest the notion of a peaceful transformation of the East-West conflict, is instructive with regard to the present-day situation.

The journalist Norbert Mappes-Niediek recently drew attention to the debates over a no-fly zone at that time, in the context of the Ukrainian war today. Calls were made for this back then, just like today, and it was ultimately proclaimed in Bosnia. At that time, Mappes-Niediek says, air strikes did not play a major role militarily speaking. What the no-fly zone did lead to was military intervention. In this respect, the debate which we are witnessing in the media at present with its lofty moral tones could have much weightier consequences than one could infer from the humanitarian arguments. Mappes-Niediek concludes from his consideration of the Yugoslavian experience: Those who want to prevent a worldwide catastrophe must sometimes also have the courage to say no to demands of the party under attack.

Above and beyond entering the war with all the incalculable consequences such a move portends, there are other forms of sanctions to discourage this violent incursion by the Russian regime. In selecting the right means, however, it would be wise to take a big step back from the good-evil dichotomy. Everyone, it would seem, is placed in some kind of category: that of the freedom fighter, the Stalinist or the liberal democrat. However, the world is not in turmoil or disarray within the clash of systems. It is a result of the end of politics, of the hegemony of economics – and all this in the shadow of a climate catastrophe. Years ago we wrote in a circular letter: Disaster capitalism is coming home. Now it really is back. In both its authoritarian and liberal forms, it is part of the problem and not the solution.

"The confrontation between 'democracies' and 'autocracies' is overstated, and overlooks that Western countries share with Russia and China not only an unbridled hyper-capitalist ideology, but also a legal, fiscal and political system that increasingly favours large fortunes," writes French economist Thomas Piketty. He calls for sanctions that target the oligarchs and not the Russian people. Resurrecting and expanding the idea of the Tobin Tax would be a good way to attack world disorder in this war.

Putin already expressed his sympathy for the Pinochet model in Chile in 1993. This sympathy for a dictatorial solution is older than the Eurasian ideology that obfuscates a spiritually destitute rule, paints a Z on the door and forces all free thinkers to leave the country. The campaign against Ukraine is above all a means of securing this form of rule. Perhaps that is the real intent underlying this war.

5. Solidarity aid or: carrying on as usual

The solidarity with Ukrainians and those fleeing Ukraine is overwhelming. Solidarity and a willingness to help are a start. Just like in 2015, a culture of welcome is being established to counter the fear of "outsiders" and in favour of a diverse society. This is an opportunity to create an association of solidarity above and beyond the nation-state with its exclusions and demarcations. If the European house is now built from below, in confrontation with different historical experiences and narratives, mutual non-understanding, and yet standing together, then a new door will open.

Many questions remain unanswered: How do we continue the decolonisation of Europe and grasp the Eastern and Central European experience as part of this process? How do we succeed in redefining multilateralism and turning global institutions beyond the nation-state into effective places of global democratic negotiation? How can the right to rights to which everyone – including refugees - is entitled be enshrined in laws that are still made by the nation-state, but which already point beyond? These questions are not an answer to the war. But if the world's disorder is obviously characterised by the greatest unpredictability, then it is only possible to carry on where people work on universal and equal rights for all, reinvent the common good and do not allow themselves to be put in a category. 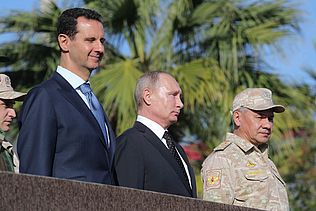 The outrage over the attack on Ukraine is preceded by a long silence about Russia's role in Syria. 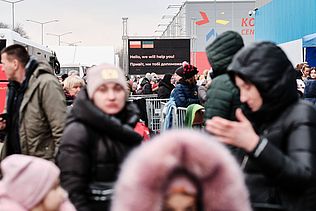