On 11.8.12 the police arrested 44 members of the medico-partnerorganization Gays and Lesbians of Zimbabwe (GALZ) as they were launching a new report entitled "Violations" and holding a briefing on the second draft of the constitution. The actions of the police bore out the report’s findings about how the LGBTI are routinely subject to violence and harassment by public officials, including how the police actively exert abuse and turn a blind eye to this violence. On 12.8.12 GALZ informed medico that all 44 were released without charges.

You can also download the GALZ LGBTI RIGHTS VIOLATIONS REPORT 2011 here as PDF.

GALZ is disturbed by the continued harrassment and the unjust Police raids that are severely compromising its efforts to reach out to it’s lesbian,gay,bisexual and transgender community.

The Zimbabwe Republic Police has carried out two raids in two weeks, arresting, harrassing and assaulting members of GALZ. The raid of the 20th of August is unjust and signifies the contnued, sustained attempts by the state to clampdown on organisations that are playing an important role of empowering citizens to be more informed to seek and demand justice.

The seizure of computers and GALZ publications is another attempt to derail GALZ efforts. It is ironic that some of the machines seized are the same machines that were recently returned to GALZ from the raid of the GALZ offices in May 2010. State sponsored violence and homophobia sways public opinion in a negative way.It also exposes LGBTI people to public violence. State Sponsored Homophobia has the potential to escalate violence and vulnerability of LGBTI people in public and private spheres of their lives.

We reiterate our call to the Police to end the unjustified harrasment of GALZ and its community. Every Person in Zimbabwe is entitled to hold opinions and impart ideas without interference. Zimbabweans have a right to assemble freely associate with other persons and to belong to an association that protects their interests. GALZ remains resolute in its quest to represent and protect the rights and interests of all LGBTI citizens despite such unprecedented challenges on its human rights defenders.We continue to work towards contributing to a just society that protects the human rights of all LGBTI people as equal citizens in Zimbabwe.

Today at 1330 hours the Zimbabwe Republic Police came to the GALZ offices demanding entry. No members of staff were present at the time. No arrests have been made so far. The police have remained at the premises all afternoon and only produced a search warrant at 1830 hours. Human rights lawyers have been present from 1530 hours and continuing engaging with the police officers. At the time of this alert, the police are still searching the offices in the presence of our lawyers. So far, as at 2100 hours, we have been informed that the police intend to confiscate some booklets, pamphlets and computers from the offices that they have accessed so far. 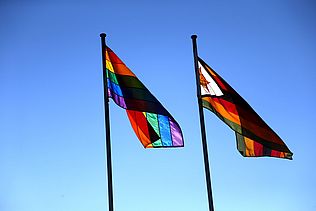 “We Cannot Work In Isolation”

LGBTIQ+ have been greatly affected by the pandemic. How we, as a community organization, still manage to continue supporting our people. By Michelle Ruhonde and…