Out of sight, out of mind

Symposium about externalisation and regionalisation of migration and refugee policy, 23 February 2016, Berlin

Since October 2005 at the latest, when hundreds of refugees and migrants attempted to climb the fences of the Spanish exclaves Ceuta and Melilla, the European Union and its member states have expanded the reach of their migration and refugee policies far beyond their borders. To prevent refugees and migrants from reaching Europe, these policies now systematically focus on the countries of origin and transit states.

On behalf of the EU, and to ‘secure’ European borders against migrants and refugees, human rights abuses have become regular in the countries of origin and transit states and border police officers are abusing refugees and migrants. For their cooperation in securing borders and ensuring that those seeking protection cannot reach the EU, transit countries have been promised substantial financial incentives. Since the beginning of 2016, however, a deep crisis has beset Europe’s border regime: hundreds of thousands of people seeking protection have crossed European borders since the summer of 2015. European heads of state and government are currently doing all they can to regain control over the movements of refugees and migrants; key to this effort is the externalisation of border control.

From the RabatConference on migration in July 2006, to the Khartoum process, launched in November 2014, and the recent intensification of cooperation between the EU and Turkey in 2015, over the last decade the EU and its member states have developed numerous action plans, programmes and projects aimed at stopping migrants and refugees long before they reach European borders. Humanitarian disasters will no longer be allowed to take place in front of Europeans in holiday destinations on the Mediterranean coast. Accordingly, European heads of state and government are currently focusing their efforts on developing new cooperation agreements with Mali, Niger and Turkey and the countries that make up the Horn of Africa to effectively keep refugees far away from European borders.

Externalisation and regionalisation represent key elements in Europe’s strategy. Externalisation means that EU border security is shifted beyond the EU’s borders. This mainly refers to the export of border control technology, the training of border police, readmission agreements, joint border patrols, lobbying concerning migration legislation and the integration of migrant, development and security policy. Regionalisation means restricting the movement of refugees and migrants to regions far away from Europe such as the Sahel, the Horn of Africa or the Middle East.

Increasingly, EU member states are factoring in a country’s willingness to cooperate in migration control as a condition to receive development aid. Human rights play a secondary role, and only apply if they serve the overall purpose. The discourse within EU institutions and member countries on tackling the reasons that lead people to migrate, as much as the practices this results in, mainly aims to keep refugees in their home countries and hidden from the European public. Such an approach cannot solve the underlying causes. Moreover, many of the African and Middle Eastern governments that the EU collaborates with in its drive to externalise and regionalise migration control are responsible for the kinds of human rights abuses that force people to migrate.

To anchor Europe’s vision on refugees and migrants and ensure they remain far beyond Europe’s borders, the EU, individual member states and organisations such as the International Organization for Migration (IOM) actively pursue media campaigns in the countries of origin and in transit countries with the aim of preventing migration and forced displacement.

In Europe, migration and displacement are presented as a threat to the security and stability of the EU and as related to terrorism, while very little regard is shown to migrants’ and refugees’ rights to safety. The purported security risk is met by fighting smugglers, beefing up border security and increasing deportation and/or readmission obligations. Allegedly, these measures aim to protect refugees and migrants. In reality, however, they lead refugees and migrants to take increasingly dangerous routes, or otherwise force them to pay for the services of dubious smugglers. Migrants and refugees face the growing danger of being returned to non-safe countries of origin or transit states. Increasingly, the political debate within the EU distinguishes between ‘economic migrants’ from so-called ‘safe countries of origin’ and ‘true’ refugees; this debate opens the door to a tightening of European asylum legislation.

Instruments and practices in migration control

Cooperation with African countries of origin and transit states

The Rabat Process, involving EU member states and West and North African countries, established the blueprint for the Khartoum Process, set in motion in 2014 with its focus on the Horn of Africa. Both are long-term programmes of cooperation mainly focused on tackling ‘illegal’ migration and integrating migration and development policy. The Rabat Process focused on border management, preventing irregular migration, and refugee protection. The Khartoum Process, according to internal EU documents, foresees the ‘strengthening of governmental institutions in Eritrea’ and providing them with the necessary support to combat human trafficking. The programme intends to train Sudanese border control officers in migration management and enhance border management in South Sudan. Furthermore, a training centre at Egypt’s police academy is to be created to train police officers and law enforcement agencies from different African states.

Both processes aim to guarantee more efficient border controls, prevent smuggling and human trafficking and counter the causes of migration. New asylum centres are to be built in North Africa, the Middle East and the Horn of Africa. In Niger, in four of its centres, the International Organisation for Migration (IOM) already offers ‘voluntary reintegration packages’ for refugees and migrants. Precisely what these consist of, how voluntary such returns actually are, and how much money people receive (assuming they do), is unclear. Foreseeably, these centres shift the refugee issue out of the sight of Europe and provide no true solutions.

A specious deal with Turkey

In 2015, Turkey was the most important transit country for refugees heading to Europe. By the end of December 2015, over 850,000 people seeking protection had passed through Turkey, and, as the land route was closed in 2012, crossed the Mediterranean and reached the Greek islands. In mid-October, an action plan aimed at ‘strengthening cooperation to prevent irregular migration into the EU’, established the main points of future EU-Turkey cooperation. Turkey is to secure decreasing levels of migration across the Aegean See to Greece. In exchange, Erdogan’s government will receive up to three billion euros, and a discussion will begin in lowering visa requirements for Turkish nationals who wish to enter the EU. The EU will also intensify accession negotiations with Turkey. Currently a ‘safe country of origin’, Turkey could even become a ‘safe third country’. This would mean that refugees could be swiftly deported from the EU to Turkey, which is wholly unacceptable considering Turkey’s human rights record, the catastrophic conditions for refugees in the country and Turkey’s regionally grounded objections to the Geneva convention on refugees.

The consequences of the externalisation and regionalisation of European refugee and migration policies on human rights, development and security for migrants and refugees are unacceptable and stand in stark contrast to the human rights commitments on which the European Union was built. 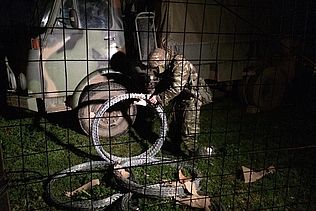