The outbreak of the disease was only possible due to the region’s social and economic situation, which result from policymaking. Decades of marginalisation and social inequality are major issues that need to be addressed. Doing so needs to be a top priority for restoring stability to all countries affected. The global dimensions are that brain drain in the medical professions must be stemmed, and rich nations must contribute to funding health care in the world’s least developed regions.

West Africa presented optimal conditions for the spread of the Ebola virus in 2014. The health-care systems of the three countries worst affected – Guinea (Conakry), Liberia and Sierra Leone – are among the weakest in the world. Ebola swept relentlessly across the region. Ten thousand people were infected in Sierra Leone alone, and nearly 4,000 people died. Altogether, the epidemic claimed more than 11,000 lives.

Even today, the death of so many relatives and friends casts a pall of sorrow over Sierra Leone. Moreover, the fear that the disease could return is still being felt, and so is the sense of helplessness at having been abandoned by the government and international community. At the same time, people’s pride in having beaten Ebola in collective action is also evident. They know full well, however, that poor health-care infrastructure left them no alternative. A professionally run and adequately equipped health-care system would have nipped the Ebola crisis in the bud.

“Do or die.” This was the laconic response to the question of what motivated thousands of community workers, many of whom received only minimal remuneration for their efforts. They spent months going from door to door, informing people about risks and how to protect oneself. Many of them became infected themselves and even died because of the poor standard of equipment at health facilities. The community is proud of everyone who helped the sick and fought the virus “on the front line”.

People saw their actions as self-empowerment. At the same time, they were acutely aware of the absence of the state agencies and the government’s failure to build effective health-care and education infrastructure, especially in rural areas . For decades, successive Sierra Leone governments have failed to establish a public health system worthy of the term.

During the epidemic, there was less tolerance for rule-bending and corruption that otherwise mark daily life in Sierra Leone. The political leadership was not, as it normally is, above the law. Sierra Leoneans were astonished when Vice President Samuel Sam-Sumana was quarantined for 21 days after one of his bodyguards died of Ebola. They were equally surprised when a high-ranking minister was stopped at a roadblock and forced to observe the travel restrictions imposed across the country. Indeed, the rules that were put in place to stem the disease applied to everyone. Ebola became a social leveller.

Today, existential fears overshadow the relief that the epidemic is over and freedom of movement has returned. “No one at present can say for sure how the virus will develop in the bodies of those who survived,” says Archchun Ariyarajah of the World Health Organization (WHO) in Freetown. Survivors have to cope with all sorts of symptoms on a daily basis, and many symptoms are delayed, ranging from awful joint pain to severely impaired vision and depressive moods. This state of affairs has an impact on households and society as the loss of a breadwinner, even temporarily, may plunge entire families into destitution.

The acute poverty in which the people live makes healing twice as hard as it would be anyway. “We were very poor even before the epidemic. While it lasted, we couldn’t cultivate our fields because we were quarantined. We lost the harvest and couldn’t build reserves,” says Musa Koroma. His eyes are red, his athletic body is crippled by pain, and he has lost everything he once owned: “After we were taken to the Ebola centre, everything was burned as a security measure. We face ruin, like those who returned home after the civil war.” Decades of brutal strife only ended in 2002.

According to its recently published post-Ebola strategy, the government is contemplating to provide Ebola survivors with free health care. But such a promise will not help much in the short term given that most people have no health facilities within their reach.

Many survivors’ suffering is compounded by the fact that they are ostracised and treated with mistrust by those around them. In some places, they are held responsible for the whole calamity and cannot return home. “Even relatives react with hostility, because, even after having coped with extreme poverty for decades, many simply don’t know how to find the means to survive,” says Abu Brima of Network Movement for Justice and Development (NMJD), a humanrights organisation. He wants all anti-stigmatisation measures to be community based, so responsibility is shared, and survivors are not isolated. After the war, segregation proved counter-productive, when the wounded – especially those who had been savagely mutilated – were accommodated in separate camps.

Where will the money for development come from? To generate more government revenue, it is important to diversify the economy, promote small-scale farming and establish manufacturing industries. At present, not a single one of the three Ebola-affected countries can possibly fund a proper health-care system on its own. External donor funding is essential, and it must be monitored independently.

The recently published Panama Papers give an idea of the kind of money that could be made available to post-Ebola countries. Closing tax havens would significantly boost government revenues and – even more important perhaps – restore confidence in government capacities. The lack of such confidence made fighting Ebola much harder.

The call for financial support for health care is based on more than only the Ebola crisis however. An international financing mechanism should compel all sufficiently prosperous countries to contribute to poorer countries’ welfare-state social budgets. The principle of solidarity has long been practised at national levels, and it must be extended to the global context. Humanity does not lack the resources to provide full-fledged health care to all people in all countries. The truth is that the rich countries are refusing to share existing resources in a fair and equitable manner.

Sierra Leone has about 7 million people and employs fewer than 300 doctors. Around three times that number work at Frankfurt’s University Hospital alone. In the wake of the Ebola epidemic, health-care provision contracted even more. The number of malaria deaths doubled, maternal mortality began to rise again, and measles spread. Similar developments were observed in the neighbouring countries too.

Patients almost always have to pay personally for treatment at a health centre or hospital, even though mother and child health-care programmes are officially free of charge. It was the lack of public health-care infrastructure that allowed the Ebola outbreak to become an epidemic. Unless an effective health-care infrastructure is built and well-trained professionals are made available, there can be no effective disease control in the future, warns Albrecht Jahn of Heidelberg University. The problem is that only 10 % of the doctors trained in Sierra Leone stay in the country after graduation. The vast majority emigrate in search of acceptable salaries, and many are poached by health institutions based in prosperous nations.

One of the first steps for effective preventive action should therefore be a reduction of the brain drain in the health-care sector. It could be achieved by introducing a binding international code of conduct for the recruitment of health-care professionals. Moreover, according to Shecku Mansery of the aid organisation SLADEA, which organised Ebola aid for the churches, “the government finally needs to meet its responsibility by raising salaries in health and education to a level that encourages professionals to stay in the country.”

Key factors in stemming the epidemic included involvement of local communities, reliance on their specific expertise and development of the necessary empathy. Strengthened by that experience, communities now expect the health-care system to improve fundamentally. Moreover, participants in the first post-Ebola conference in Freetown earlier this year called for healthier living and working conditions.

The next step in a policy aimed at meeting people’s needs would be to reform the constitution. Such changes are demanded by non-governmental organisations such as the Civil Society Forum in Sierra Leone. They want to see the right to education and the right to health enshrined in the constitution. Experience in South Africa, for example, shows that it makes a difference when the government can be sued for breaching the constitution. “Access to quality education and health care is the prime requirement for curbing the power and despotism of the state,” says Abu Brima, director of the NMJD. 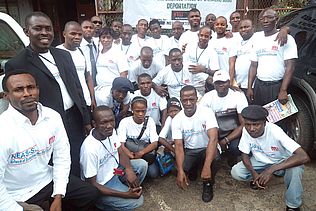 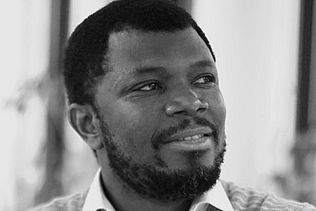 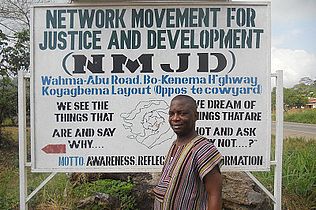