Europe is called upon

We will never forget the pictures of the Yazidic men and women saved from the incipient genocide in 2014 by the Kurdish People’s Protection Units (YPG). Yet it is all too possible that we will soon be confronted with pictures of Kurdish victims . When the Yazidis were attacked by their persecutors before the eyes of the world, they were abandoned by all the world powers – except the Kurds. These are the men and women who have borne the brunt of the struggle against the Islamic State in recent years, losing some 10,000 of their fighters. Now, they could be directly impacted themselves, and not for the first time. Since the announcement of the withdrawal of US forces, Turkey has threatened to send troops to invade Rojava, the areas of northern Syria with majority Kurdish populations. President Erdoğan has already positioned 80,000 soldiers and his air force at the Syrian border. It is conceivable that there will be no-one to stand by the men and women inhabiting northern Syria. This is why we are speaking out today, to demand that Europe oppose this announced humanitarian and political disaster.

If Rojava is overrun and captured, the Turkish army and associated jihadi militias will resume what they started in January 2018 with the occupation of the Kurdish region of Afrin in breach of international law. There, they exploited the flight of well over 100,000 people to implement a systematic resettlement programme. This had already been done in 2016 in Kurdish cities in the south-east of Turkey, which had previously been heavily attacked by the Turkish military. But no one will be able to flee from Rojava – there will be no safe refuge left for the people there.

The conquest of Rojava would destroy the process of democratisation which has been advancing there for six years. Northern Syria’s self administration never was and is not now a purely Kurdish affair, but is rather a multi-ethnic and multi-religious self-administration. In the harsh conditions of a region devastated by war, inhabitants are nevertheless free to assert their rights to freedom, equality and solidarity. There have been and are democratic elections, the media have more rights than in other parts of Syria. Efforts to establish a basic health service have been extraordinary, and also cover several hundred thousand people from Syria and Iraq who have taken refuge there. In contrast to the other parties to the Syrian conflict, the northern Syrian self-administration has responded to accusations of human rights violations and opened its doors to international procedures for reviewing these.

To reach agreement with Erdoğan the USA is now negotiating over the establishment of a so-called protection zone. However, the region involved is the centre of the majority Kurdish settlements, including the cities of Kobanê and Qamislo. Opening them up to Turkish troops means depriving the people of northern Syria of all protection.

This is why all remaining diplomatic opportunities must be used to prevent the disaster that has been openly announced before the eyes of the world. As things stand, much depends on the European Union, which is represented on the UN Security Council through France, the UK, Belgium and Germany. We are appealing to the European Governments to do everything in their power. This has to include determined efforts to find a peaceful solution covering Syria as a whole, which also includes preventing the second announced disaster – a campaign of devastation by Assad and his allies against the province of Idlib. Jihadi militias who have committed many war crimes and violations of human rights are not the only people trapped here: there are also millions of men and women civilians, including many members of the democratic opposition who already have a long history of suffering persecution and war.

Instead of even flanking Erdoğan’s politics against the Kurds and all the other members of opposition by calling them “terrorists”, the EU should reconsider their cooperation with Ankara on migration policy. This is particularly aimed at the German government, which already prohibits the showing of Kurdish symbols. In return, the right of people from Syria to find protection from their persecutors in Europe is to be guaranteed explicitly. This is in our own interest: anyone weakening or destroying democratic processes by allowing authoritarian regimes free rein will never be able to make the world safer for anyone.

medico supports the reconstruction of a hospital in northern Syria. END_OF_DOCUMENT_TOKEN_TO_BE_REPLACED 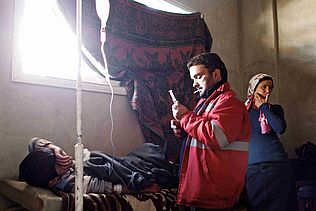 At the Turkish-Syrian border, Kurdish cantons have begun to administer themselves. They have also become a refuge for other refugees from persecution in a…