The verdict is recognition of their suffering

On 10 May 2013 Guatemala's former dictator Rios Montt was convicted of genocide against the indigenous Ixil and of war crimes. Ten days later the verdict was overturned because of alleged procedural errors. What's the status of the struggle against impunity in Guatemala after all these years?

Your political and legal work for human rights has achieved almost incredible success, particularly in the last few years. How has this happened?

We have actually seen clear cracks appearing in the wall of impunity in the last few years. Obviously, the decisive factor is the courage and endurance of my colleagues, the victims and the witnesses. However, what makes the situation in Guatemala different from that in other countries where there have been similar crimes is the fact that a lucky chain of circumstances in 2005 put us in possession of the police archives with 80 million documents, many of which relate to the years of the worst violence from 1975 to 1985. This evidence has helped us enormously. Another important factor was that the Inter-American Court of Human Rights has issued several rulings in recent years, that its verdicts are recognised by the national courts, and that investigations have been promptly initiated by the Guatemalan public prosecutor's office under new leadership. The Guatemalan Supreme Court has contributed to these rulings. For example, between 2011 and 2013 we got several verdicts of absolutely strategic importance, including some against high-ranking military officers. The pinnacle was the conviction of Rios Montt,

…which caused a worldwide wave of euphoria. For the first time ever, a former head of state had been convicted of genocide in his own country. You immediately warned that there would be serious resistance to the verdict – and you were proved right. Where do you think the Montt case will go from here?

First, let me say that we continue to believe that Rios Montt has been convicted. The Constitutional Court's order to overturn the verdict and return the trial to its state before the oral arguments was not only illegal, it was fraudulent. This is clearly the result of pressure on the court by politicians and the business community. This is why we appealed the ruling to the Inter-American Court of Human Rights. In Guatemala the new hearing is still officially scheduled to begin again on 15 January 2015. However, it will take a miracle for the hearing to take place on that date on a fair basis. We know that our successes are built on quicksand, and that we could run into an unpleasant surprise at any time. The political forces are in place for this.

How would you describe these?

At the moment we have a situation in Guatemala where not only is the President a former officer, but a whole lot of key areas in the executive are headed by officers and former generals. After the verdict on Rios Montt, the ruling élites closed ranks between the military and the business community, making it clear that they were no longer prepared to tolerate a system of justice which they do not control. The judges who handed down independent verdicts in recent years are coming under increasing pressure. Recently, for example, the judge who convicted Rios Montt, Yassmin Barrios, was suspended from office for a year under completely preposterous circumstances by a so-called bar ethics commission, a decision which is completely outside their jurisdiction - she's a judge. The Guatemalan justice system had begun to move in a good direction, but now the aim is to set it back to what it always was, a bastion of impunity. Overall, under the current government there's been a very sharp increase in repression of the courts, human rights defenders, and representatives of the indigenous and rural populations. This isn't all. the repression has become more brutal, widespread and systematic.

The Ixil have been fighting for decades for investigation of the crimes against their people. Among other activities, medico partner Equipo de Estudios Comunitarios y Acción Psicosocial (ECAP) has been assisting over 100 witnesses and participants before, during and after the trial of Ríos Montt. What does the overturn of the verdict mean for the witnesses?

Recently, on 19 March 2014, exactly a year after the trial, I was in the Ixil region to meet with the witnesses and survivors. My impression is that they are entirely clear that the other side is bringing up the heavy artillery and forging powerful alliances to stop the trial and leave the reversal of the verdict in place. But the witnesses are neither depressed nor intimidated, and are drawing closer together again in this difficult situation. At the event to mark the anniversary, many had a thick book in their hands, about 800 pages long, the published verdict. Their verdict. You had to see for yourself the intensity in the way they clutched that book, which tells the truth about their sufferings, gives recognition to the long way they've come. The book, and the fact that an independent court confirmed that they were right, are giving them great strength.

Michael Mörth: The human rights lawyer has worked in Guatemala for almost 20 years on the crimes of the civil war, inter alia for the International Commission against Impunity in Guatemala and medico partner Bufete Jurídico de Derechos Humanos, which are effectively conducting 80% of the cases against former military officers and also represent the dictatorship's victims as co-plaintiff in the trial of Ríos Montt.

The interviewer was Monika Hufnagel.

medico supports the Bufete Jurídico de Derechos Humanos (BJDH) and the Comisión Internacional de Juristas (CIJ) in the struggle against impunity in Guatemala. For many years, medico has also supported the psychosocial work of Equipo de Estudios Comunitarios y Acción Psicosocial (ECAP) in coming to terms with the crimes of the past, and countering the consequences of political violence for individuals, groups and communities by rebuilding social structures. In 2013 support for these partners totalled €56,222. 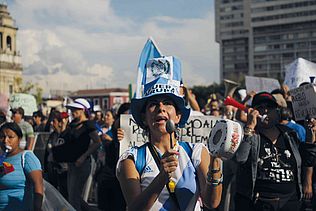