It happened as it was to be expected: Four years of standing on the sidelines have resulted in a catastrophe. 40,000 human beings, penned up in hopelessly overcrowded EU-hotspot centres like Moria on Lesvos Island, living under squalid living and hygienic conditions, will soon face the deadly disease. European countries close their borders and enforce social distancing in order to curb the spread of the pandemic. But the Greek health system, already severely weakened by austerity policies and the economic crisis, is in no condition to guarantee the medical care for refugees once the pandemic starts spreading widely. Yet still, the EU does not answer the numerous appeals to evacuate the centres and to bring those affected to safety. Internment is the EU’s answer.

These policies are entirely in line with what we have witnessed at the Greek-Turkish border in the recent two weeks. An unprecedented brutalisation of EU migration policy, coupled with the unscrupulous violation of fundamental human rights, European law and the Geneva Convention on Refugees.

People seeking protection in Europe are being shot at with tear gas, beaten up, stripped and illegally pushed back across the border. In the Aegean sea, refugees are aggressively attacked by the Greek coast guard, engines destroyed and rubber dinghies stabbed at. Even what was unspeakable in 2015 has now become reality: Even what was still unspeakable in 2015 has now become reality: The border is being defended with live ammunition and several people have been shot at the Greek-Turkish Evros border. European border policy has thus turned from a policy of passively acquiescing to death at the external border to one of actively killing.

Right-wing extremist networks publish bounties for volunteers and employees of international organizations on the Greek islands. They are being hunted down and brutally beaten up by fascist mobs. Fascists from all over Europe arrived on the Greek islands, social centres and solidarity structures were set on fire.

In addition, the right to asylum has been suspended for all persons who have entered Greece after March 1, 2020. The Greek government announced, through its spokesperson Stelios Petsas, that it would not accept any asylum applications from newly arrived persons for one month. Newly arrived refugees are being held under ad-hoc detention conditions, such as in the port on Lesbos, while the government is intent on deporting them.

However, they are not only being denied the right to protection; according to media reports, there have even been several hundred cases where people have been sentenced to four years in prison for “illegally entering the country”.

Both the prohibition of refoulement and the prohibition of collective expulsion are unconditional and cannot be suspended at any time and under any circumstances – especially not by a mere memorandum of understanding on migration policy that is not legally established, such as the EU-Turkey Deal of March 2016, commonly but falsely referred to as an international agreement.

Nevertheless, the EU and Germany are backing Greece, which the EU Commission President and former German Minister of Defence Ursula von der Leyen described as “the shield of Europe” and which will receive 700 million EUR for border fortifications. The spiral of militarisation continues to grow: The European border agency Frontex will be sent to the border in a RABIT special operation. What it should do is uncertain – participate in the shootings?

It is scandalous that the European Union is prepared to throw overboard any legal base, morality and pretense of civilisation merely because a few thousand persons intend to seek asylum at the Greek border. The disastrous EU-Turkey deal of March 18, 2016 has once again handed an authoritarian regime power over European policy. The political mantra that 2015 must not repeat does not allow the EU to consider alternative policy options.

The refugee migrants have in fact become a bargaining chip and human ammunition for the Turkish AKP government’s militaristic and domestic policy plans. They have been placed in the hands of this government by an EU migration policy that relies on deals to build up authoritarian regimes as buffer zones of Europe for purposes of staving off refugees. But Turkey is not a safe country, it only grants asylum to holders of a European passport. Even if Turkey’s military presence in Idlib aims to prevent the violent displacement of another 3.5 million people by the Syrian-Russian military offensive towards its border, Turkey is and remains responsible for hundreds of thousands of evictions since its attack on Syrian territory under Kurdish self-government. Fleeing refugees are also being shot at at the Turkish-Syrian border – and Turkey itself is deporting refugees to Syria.

In recent years, the Turkish president Erdoğan already threatened to cancel the EU-Turkey deal in regular intervals. This time he has made his threat more forcefully: People are driven to the border in buses, crammed together and sometimes forced to cross the border with physical force and at gunpoint. The aim of all this is to produce images that are to persuade the EU and NATO to support Turkey in its war strategy and to stem flight migration from Syria. Additionally, Syrians are to be settled in order to change the ethnic composition in a so-called security zone in the Kurdish areas of north-eastern Syria and through a large-scale expulsion from Turkey. The Turkish president intends to kill two birds with one stone: he would have severely weakened the Kurdish democratic self-administration and at the same time would have rid himself of the refugees temporarily tolerated in the country.

Instead of recognising the beginner’s mistake of EU migration policy – i.e. the dependence on authoritarian regimes – as the cause of the current predicament, the EU is trying to appease Turkey by all means. In doing so, it ignores the fact that the deal has never worked and never will: neither the 1:1 exchange (where one Syrian should be resettled to Europe for every Syrian person deported from Greece to Turkey), nor the emptying of the Greek islands by deportations. The only functional element of the deal is the horse-trading of billions against violent migration deterrence. Once this fails, the true face of this helpless and failed migration policy will become apparent: The shooting at the EU’s external border is its final and logical consequence. The EU-Turkey deal has failed from the onset and every new attempt at a deal will fail similarly!

// The Dual Sound of Walls and Fascism

The reinterpretation of the welcome culture of 2015 as a „refugee crisis that must never repeat itself“ creates such anxieties that shootings are tolerated rather than considering the reception of refugees.

The walling-off paradigm also has its murderous domestic aspect. Numerous cities and municipalities – as in the network of “solidarity cities” – still stand for a practice and culture of welcome and for an open society and politics. But the demonisation of migration as “the mother of all problems” (German Federal Minister of Interior Horst Seehofer in 2018) has also made societal discourses and actions of “defending Europe” acceptable. In this respect, the resurgence of fascism at the external border is closely interwoven with growing extreme-right terrorism and attacks on the foundations of democracy in European societies. Europe is at a crossroads: We can only counter this madness with a return to fundamental rights and the openness and willingness to welcome refugees. 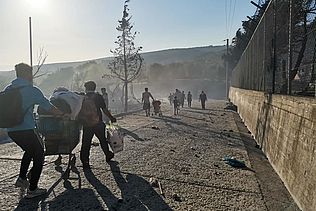 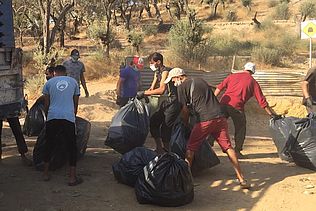 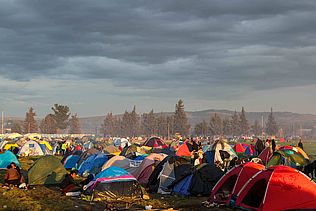 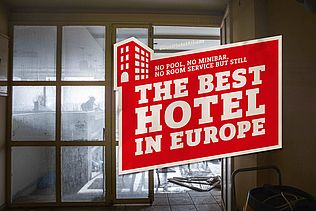