Protests against uranium mining in Caetité

What prompted you as a priest to oppose open-cast uranium mining in your region?

For the past six years now, I've been dealing with the damaging consequences of uranium mining for my community. I can understand the outrage of the people here, because I myself come from here, from a peasant family. The contamination of the drinking water – this is an intolerable threat to the peasants' life.

The operators of the uranium mine made a lot of promises to the region's inhabitants. How have these turned out?

They promised everything you can think of, employment for their children, fair wages, everyone was going to be wealthy. When the work started, all this turned out to be fraudulent. People lost their livelihood and got nothing new in return. The few jobs offered in uranium mining are hard physical labour with extreme health hazards. Instead of the promised jackpot, they got heavy machinery. The daily blasting shakes the whole area. And so their hopes were dashed. This in turn engendered a sense of powerlessness. You can see it in people's eyes. I see this powerlessness as a social sickness. A lot of people are ill and depressed, because they feel powerless, lost. They have no strength to respond.

What can you do about this?

The church can be a place of empowerment, a place to love the poor, to serve them and to participate in their liberation. I am happy to take on this task, even if I do feel alone at times. People tell me that defending the environment is pure utopianism, romanticism, that the great social movements are a thing of the past. But the problems haven't been solved – on the contrary. The exploitation has just become less obvious. These modern times are deceptive times, where the reality is hidden from people.

Where do you feel you stand for now in the dispute about the uranium mine?

There's been tremendous progress in making the people in Caetité aware of the dangers of uranium mining and nuclear power. Earlier, we were the ones lagging behind the company's public relations people. They had a major advantage with their propaganda about progress. When we started telling the other side of the story, hardly anyone came to our events. Things are very different now. Today, most of the people in the region know that the company is massively violating the human right to health and a clean environment. Today, it's the company that's lagging behind us.

How did this happen?

The turning point was in 2011. At that time, we succeeded in holding up a transport of radioactive material for several days with more than 2,000 people. That was our poster moment against powerlessness. Since then, we've been fighting the uranium mine's monopoly on truth and information. This is a great success. But we haven't managed to achieve anything in our concrete demands. There's no appropriate compensation for the 26 families living directly by the uranium mine who absolutely have to move away. The operator is refusing to meet our demand for regular supplies of guaranteed safe drinking water. There are no epidemiological studies by an independent institution on the consequences for health of the population and the labourers in the open-cast mine. There are no credible medical examinations at all. People have a right to accurate information, and to know what water they're drinking and what air they're breathing. 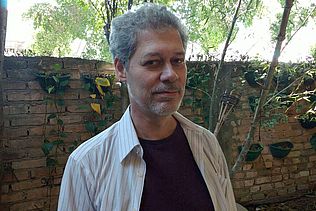 Another reason for the failure of the government project of the Workers’ Party (PT) was the media monopoly of the old elites. Antonio Martins’ discussion portal…