Another reason for the failure of the government project of the Workers’ Party (PT) was the media monopoly of the old elites. Antonio Martins’ discussion portal Outras Palavras supports left-wing points of view.

“Every major defeat is cause for concern. But certain aspects have strengthened the sense of powerlessness in the long months of the coup in Brazil. How could a downgraded parliament, backward media and decadent companies win?”  This is the introduction of a multi-part analysis of Brazilian conditions which Antonio Martins published in 2016, including in medico. The journalist’s questions about the role of mass media in the impeachment of Dilma Rousseff in summer 2016 are not surprising. For months, the country’s biggest media group, Rede Globo, had fanned the right-wing protest against Rousseff, hyping semi-legal budget tricks as treason. In contrast, the media monopoly, owned by a small number of families, very rarely offers details of the corruption in the conservative parties and their clientelist self-enrichment policies. In the thirteen years of PT rule there was no change in the monopoly in the major media – nor were changes made to the subsidies for private media companies.

Antonio Martins confronts this domination with other information and a different form of communication. The former activist of “attac” and one of the co-founders of World Social Forums, which were born in Brazil’s Porto Alegre in 2001, Martins has been part of the search for alternatives to capitalist socialisation for decades. After a period as joint editor of the Brazilian edition of Le Monde diplomatique, he founded Outras Palavras in 2009, together with other journalists. This news and discussion portal, supported by medico since 2016, combines critical journalism with the new options in communication:  dialogue and participation, social media, blogs, and above all workshops and seminars on journalism. Close cooperation with a major network enables the editors in São Paulo to produce news articles on current affairs and in-depth background contributions. In line with its constant search for social alternatives, it also criticises the development model focused on industrialisation and major projects, which the PT governments also pushed through despite opposition by indigenous peoples and left-wing protests.

Martin explains that the seizure of power by a right-wing government is forcing the editorial team to confront a social policy rollback, and also to reappraise the failed left-wing government project. His analysis ends with a question that is also a challenge: “The struggle against the Brazilian system and to overcome inequality is more pressing than ever. On the other hand, the defeat of the Left marks the failure of a project we were all associated with in one way or another. Are we bold enough to overcome this project, to go beyond it?” 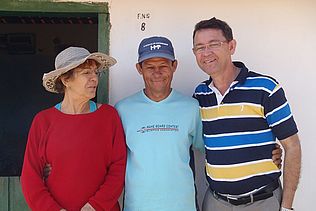 Protests against uranium mining in Caetité

Interview with Padre Osvaldino, who helped organise protests against uranium mining in Caetité in Brazil.