In December 2014, the caravan followed the migration routes through Mexico for the tenth time. For two weeks, the group of mostly mothers and wives from Central America looked for signs of life of relatives who had disappeared without trace while heading for the USA. Perhaps they had suffered an accident, been kidnapped or even killed. In the hope of a better life for themselves and their families, countless people from Guatemala, Nicaragua, El Salvador or Honduras set out every day on the route through Mexico to the USA.

They know what migration means

Tens of thousands have vanished on the dangerous route in recent years. It takes courage, strength and persistence to look for them, and to accompany the relatives of those who have disappeared. Even so, the activist men and women of the Mesoamerican Migration Movement M3 – the host and organiser of the caravan – have taken on the task. Because they know what migration means.

For example Elvira Arellana, who was herself an illegal immigrant in the USA. When she was threatened with deportation, separating her from her son born in the USA, she sought asylum in the parish house of her Chicago church. A year later, she was deported. Ruben Figueroa, who migrated to the USA as a youth, to earn money. Back in Mexico, he started to organise help for migrants from Central America, from his parents’ house.

There is also Marta Sánchez Soler. The 74-year-old was born in France, the first stop on her parents’ escape from Spain under the facists, which took them to Mexico. Her second husband, José Jacques Medina, fled to the USA to escape from a warrant for his arrest as a student activist. For many years, the activists have stubbornly persevered with lobbying, media and human rights work and accompanied transmigrants on their way through Mexico.

Fighting for the rights of migrant men and women

Marta puts great emphasis on the fact that M3 is not a humanitarian organisation, but is fighting for the rights of migrant men and women. The focus is on the political demand for a far-reaching change in policy, in Mexico as a transit nation and in the countries of origin and the destination country. As M3 coordinator, Marta is a familiar figure to the authorities – and feared, as she knows how to make their lives difficult.

And she is in the thick of it when the caravan moves through the country, negotiating an escort with the security authorities, and denouncing their shared responsibility for human rights violations. She gives interviews tirelessly and outspoken, meets government representatives and, in between, comforts the grieving. She stresses that all this would be unthinkable without the support of local activists, the network of migrant hostels and many other people in Mexico acting in solidarity. Why does she take on this exhausing job? “Earlier, the mothers only cried. Those suffering mothers have now become fighters and defenders of human rights.” 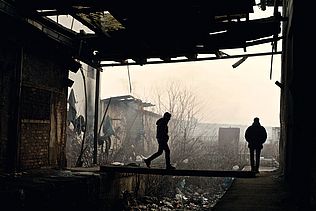 All over the world, refugees and emigrants are being forced out of the countries where they have sought refuge. With sheer violence, but in many cases also by…